I’m very pleased to finally be able to share these eight watercolor paintings, which have taken me the better part of a month and a half to complete. They are the flesh-and-blood, rosy-cheeked incarnation of a series of black and white drawings I worked on back in October, which I posted and wrote about on a previous blog entry. (So if you get a burst of deja vu when looking at these, I’m the one to blame for that.) 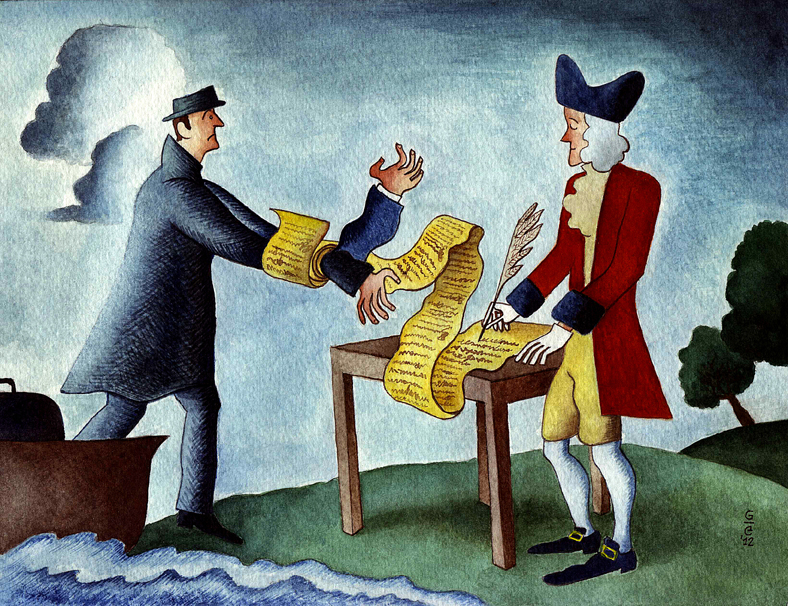 With these series, which I’ve decided to title Drifting Closer to Home, I’ve tried to tackle the ordeals, perils, and reinvention of sorts that human beings go through when they leave their homelands to start life anew in a foreign country.

Being an immigrant myself, these images are the closest I’ve ever come to autobiography in my own work, in the sense that the feelings I strove to capture (not the factual events alluded to in the images) are true to my own experiences.

As I mentioned in that previous blog entry, by turning those pen-and-ink studies into color images I was hoping to add some emotional resonance while keeping some of the liveliness and immediacy of the original drawings. I was fairly faithful to the original compositions and motifs, only changing a few key elements here and there to make the ideas more cohesive, and tightening some of the compositions to help guide the viewer’s eye to where it’s supposed to go.

I also added an eight image (the fourth one from the top) after finishing the original seven, as a way to close some loose ends in the narrative and round-up the overall intent of the series. These images were not originally intended to be viewed as a sequence, but the more I worked on them I gradually came to realize that’s probably how they work best. That’s not to say they can’t be picked out and stand on their own, or work out of sequence. That, along with the specific meaning of each image, is left up to you, Dear Viewer. 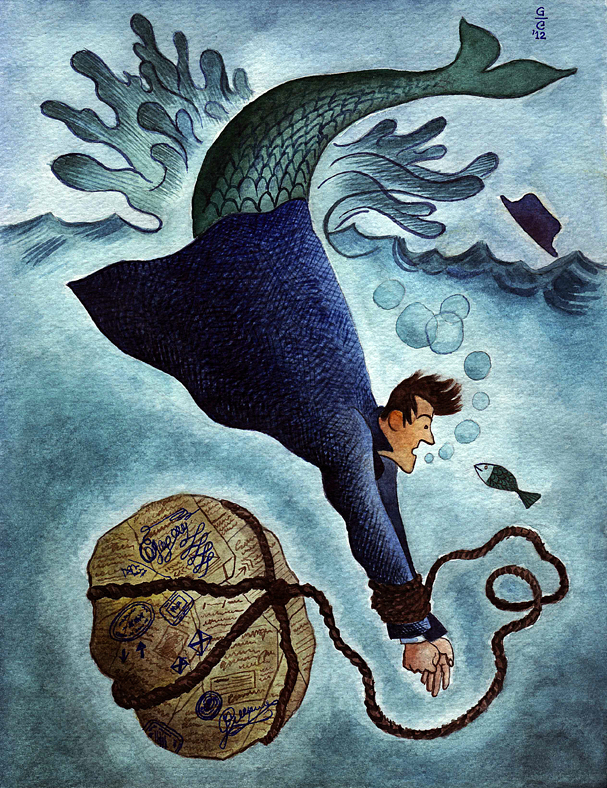 The work of Jean Michel Folon has been a huge influence on me since my college days, and my “Blue Crosshatched Man” owes a huge debt to his Everyman; my humble homage to the humanism and warmth embedded in all of Folon’s wonderful watercolors, etchings, posters, and sculptures.

So why is my own Everyman crosshatched and blue? I honestly have no idea. All I know is that I’ve been trying to expand the range of textures I am able to coax out of my watercolors, and this decision was one of those intuitive things that seemed to work with the overall visual aesthetic of the series.

Phew. Now that I’m done with these excursions into metaphorical, tree-filled dream-scapes, I don’t think I could bear to see, use, or wear the color blue ever again. Or paint or draw any more trees, for that matter. However, that should not deter any prospective clients reading this from commissioning me to work on projects that involve these things. Just let me catch my breath and click the “refresh” button in my brain, and I’ll be right there with you!